With Google Chromecast you can see the videos and pictures on your TV screen while using your smartphone as the remote control. It works with both, Android and iOS devices.

What’s great is that there are tons of apps that feature this incredible ‘casting’ technology. What’s not so great is that with so many options at your disposal, you might get a bit spoilt for choices. So, to make things a bit easier for you, we are outlining the best 15 Google Chromecast Apps.

If you are looking for the most basic app for your Chromecast device, the eponymous app is what you would like to download. This essential app didn’t seem to be very promising in the beginning. However, over time it has evolved and now offers versatility and some exciting options such as app recommendations and content discovery.

Netflix is one of the more popular Chromecast compatible apps. All you need to do to get your favourite video show running on the TV screen is hit the ‘Cast’ button. You will hardly see any time lags.

Netflix is a repository of more movies than you could probably watch in a lifetime. It also has tons of TV shows. This is why Netflix app is one of the very first apps you should have to have Chromecast running on your big TV

Both, HBO Now and HBO Go are Chromecast-enabled apps. If you have HBO included in your cable plan, with HBO Go you could stream the programs on your iOS or Android devices.

HBO Now also lets you do the same but with an exception. You do not need to buy an entire cable subscription to be able to watch the HBO shows. It is an on-demand app allowing you the access to HBO’s original videos.

Both these apps are absolutely free. But, you need to buy a monthly subscription.

If you want to watch your favourite TV shows, from different TV channels, all at one place, Hulu Plus app is the one you should have on your Android or iOS phone.

You could stream latest episodes of the shows from popular channels like Comedy Central, ABC, NBC, Fox and more. The shows are usually available the very next day of original airing.

You could watch just about any TV show you want. The app is pretty cost-effective and easy to use.  This app allows you to watch the shows of choice on your TV through Comcast without having to buy the entire channel subscription.

It is not just the videos you can throw to your TV with Chromecast, but also the music. Spotify is one of the most popular apps for online music streaming.

With more than 30 million songs in its music inventory, it is a must-have app for all the music lovers. Not only the TV, but you can use Chromecast to listen to our favourite songs on the sound system as well.

Spotify app allows you to stream unlimited music for no cost at all. However, if you want to download unlimited number of songs and play them offline, there is a monthly fee of $9.99.

Pocket Casts is one incredible podcast app. It is interface is extremely stylish and yet highly functional chromecast apps. It also features a very neat design that allows you to view your podcasts in the tile arrangement.

Every tile is home to the list of the episodes, options to download, and the summaries. This Android, iOS app comes with a number of other features and is a perfect Comcast companion for many. This is one of the best apps for Chromecast.

AllCast is one of the very popular media player apps that allow you to stream your videos, photos, and music to the TV or sound system using Chromecast and other devices such as Apple TV.

While most of the apps focus on the online content, this app lets you stream the media saved on your smartphone. It can also play the content from cloud storage services such as Google Plus and DropBox.

The free version of the app allows you to stream everything but caps the duration at 5 minus. For $4.99 you can unleash all the features.

But what if you wanted to stream the videos to the large screen of your TV using your phone as the remote control?

Google owns YouTube and thus there is every reason why it must be Chromecast-enabled; and it is. With the new YouTube Gaming and YouTube Music apps there is more fun to it than ever before.

“Ideas worth spreading”, that’s TED’s motto, and their app for Android and iOS devices is only helping TED live up to it.

The app is Chromecast-enabled and thus you can watch thousands of motivational and inspirational videos on your TV screen.

TED’s been life changing for many. It features some of the most revered personalities from various walks of life such as Steve Jobs and Bill Gates. 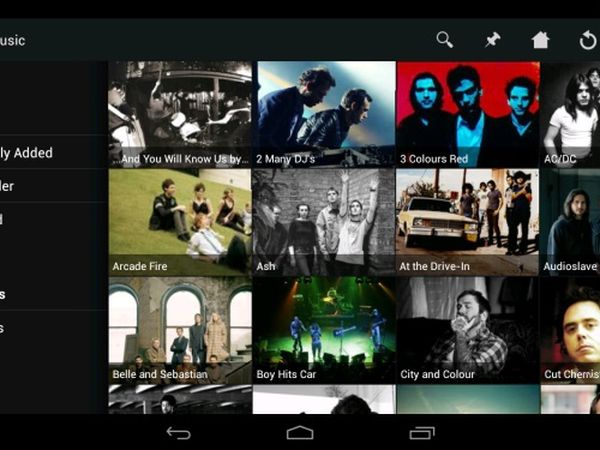 Plex service allows you to design your personal media server on your computer and then stream the media on your smartphone (Android and iOS).

Some of the incredible features of this app make it a massively popular media centre application. Create a customized media library with the videos and music of your own choosing and now enjoy them on the large screen of the TV or audio system using Chromecast.

If you would like to beam the media into your TV right from your desktop, Videostream is the app you must definitely have.

What’s so great about this app is the fact that it will play just about any media file you feed it. From the widely prevalent MP3 files to lesser known MKV media file extensions, it will render everything.

The player is free. However, if you would like to explore some additional features, there is a one-time fee to be paid.

Rdio is one of the most popular apps for those who love using Chromecast for music. Rdio is the perfect companion of the party lovers.

You could play just about any song you want without any hitches. You can also create the playlists with the incredible ease.

There is a free version of the app for Android and iOS. But, if you want to play the full version of the popular music you will want to buy the premium version for $10 a month.

PlayStation Vue by Sony is one of the newest live TV streaming apps. With this service, Sony plans to pit against Sling TV. These services are being seen as a threat and replacement to the cable TV.

In the beginning, the packages offered by this service were limited and it was only available in the select markets. Now the service is everywhere and offers more than 50 channels. You can watch sports channels, movies and live cable TV.

You can download the app for free but monthly subscription will cost you $29.99.

It is not just about the TV or music after all. There are Chromecast compatible games too. But finding the right game isn’t that easy. Thankfully, we have Tricky Titans.

It’s more like your conventional rock-paper-scissor game played by four onscreen ogre characters that are saving their village from one another.

It is a funny and simple game that keeps you engaged for quite a while. It is a free app for the Android and iOS users.

If you love to watch video games on your smartphone, this is one Chromecast-enabled app you must definitely have.

Literally hundreds of games are streamed every day. This means you always have a new game to watch.

Twitch is absolutely free for iOS and Android users.